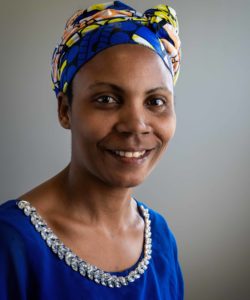 Seline Safi was born in the DR Congo but because of the violence and danger her family fled to Tanzania when she was 11. When she was 15, she met & married Jeanvier in the Nyarugusa Refugee camp, where they also raised their five children until they were relocated to Wichita in 2016.

Seline is known for her contagious laugh and her beautiful voice. She helps lead worship on the Oaks worship team and sings in the choir. She recently wrote several of her own songs and recorded them at a studio in Hesston. You can hear her singing them on YouTube here. She is also a very active prayer warrior at the Oaks. Because of the life they have seen and continue to see their parents lead, the oldest Castro daughters often organize prayer nights at their home with their friends.

Seline is a hard worker and a problem solver. When the furniture received from the IRC was falling apart, she researched and then saved her money to buy new couches. When the tables she bought at a garage sale didn’t match, she painted them all black. When her kids kept losing their books, she used a changing table as a bookshelf. When she felt that the rent was too high on their three bedroom apartment, she moved her family to a two bedroom next door and used the basement as the third bedroom. She was tired of taking the bus to work and back home so she learned to drive Jeanvier’s Honda Pilot and saved her money until she was able to buy a second car for their family. She said she wanted something small and cheap, with good gas mileage and that’s what she bought!

When she found out about the Habitat For Humanity program, she jumped in with both feet. In the program, future homeowners are required to work 300 hours on other people’s houses and to go to homeowner classes for 10 weeks before they are able to start their own home. Her boss at Filimin created a second shift just so that Seline could go build other Habitat houses from 9 a.m. – 2 p.m. and then go to work at Filmin from 2:30 – 9:30 p.m. At her job they are expected to make 50 lights per day – Seline regularly makes 80 to 90 daily – so her boss was happy to accommodate her. The building of Seline and Jeanvier’s home at 1143 N Estelle began on April 3 and should continue until mid June. If you would like to help work on their Habitat home contact the Eastminster missions office or click here.